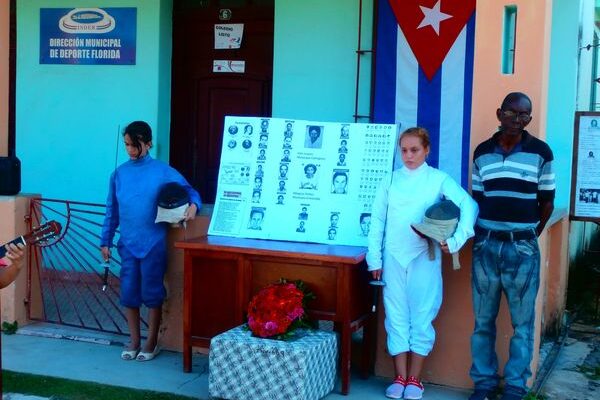 Florida, Oct 7.- The Florida sports family met this Thursday morning in front of the municipal Sports Sector headquarters to pay tribute to the victims of the abominable Barbados Crime, and once again condemn that terrorist act that snatched the lives of 73 people, including members of a Cuban delegation that returned victorious from the Central American Fencing Championship.

The commemorative act began with a minute of silence in memory of the outstanding Floridian basketball player Leydis Oquendo Valdés, who died on October 5 at the age of 40 after a postoperative complication, a fact that makes this day doubly sad for the sports family. Township.

As in previous years, at the center of the remembrance and condemnation of the Crime of Barbados in this territory was Hilario Hipólito Veret, glory of fencing in Florida, who was a teammate of several of the Cuban athletes who on October 6, 1976 His life was taken by an attack perpetrated by terrorists from the Miami anti-Cuban mafia, in complicity with the Central Intelligence Agency (CIA) of the United States.

On the 46th anniversary of this abominable crime, the family of Physical Culture and Sports in the Floridian municipality ratified its condemnation of state terrorism and paid respect to the memory of the 73 people who lost their lives after the mid-flight blasting of a Cubana de Aviación ship, a horrendous event driven by a hatred similar to that which is being encouraged these days against the Socialist Revolution.