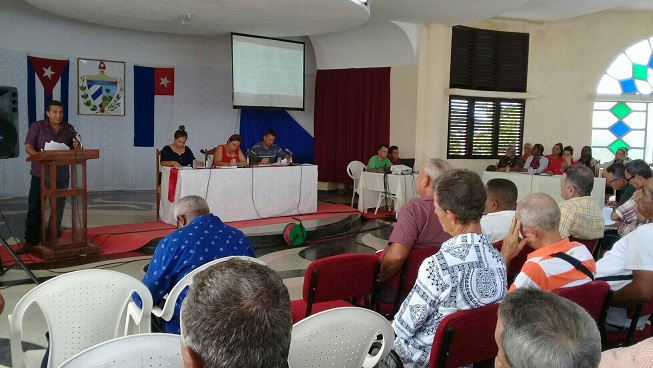 Florida Oct 1.- The management of the Board of Directors to address the proposals of the population and the progress of the rice production programs, stood out among the topics most debated by the Floridian delegates during the development this Friday of the 36th ordinary session of the Municipal Assembly of People’s Power.

In a report from this local government body, it is indicated that about 93 percent of the total of more than 7,500 proposals from the Floridian population were resolved in the three Accountability processes and through the dispatch route with their delegates in the current period of mandate of the People’s Power.

The representatives of the people of Florida reiterated the need for greater commitment and creativity to resolve the more than 300 pending community proposals, and emphasized the responsibility of the administrations of each sector to evaluate with greater rigor and systematicity the possible solutions to the problems that continue to affect the population.

Regarding rice production in the municipality, in the Government assembly on this day it transpired that during the spring planting campaign, more than 950 hectares were planted, a figure that represents only 29 percent of the plan contracted with the Floridian productive bases for this period.

Delegates who are members of the supervisory commission of productive activities, reflected in their report on the progress of this rice campaign, that among the main difficulties stand out the lack of supplies, the fuel deficit, the low availability of water due to electricity generation and the late definition of the price of rice, which caused losses to producers.

During the evaluation of this matter and other socioeconomic activities in the session of the Municipal Assembly of People’s Power in Florida, the need to increase effort and creativity on each productive front to supply local initiatives for imports that currently cannot be carried out was made clear. the country, and make better use of the few resources and supplies available in terms of social welfare and development of the territory.