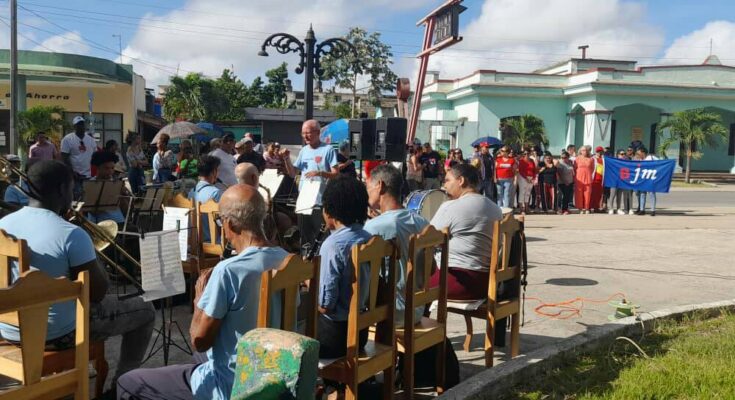 Florida, Oct 12.- The centenary Municipal Concert Band of Florida interpreted the National Anthem of Cuba during the inauguration of the Day for Cuban Culture, after the placement of a floral offering on the bust of José Martí, by the instructors of art Mabis Casal and Arturo Nasco, leaders of the Little Son Musical-Theatrical Project.

With the presence of the highest partisan and government authorities of the territory, the director of Culture Betty Marrero Reguera, officially opened this cultural festival that will have special characteristics due to the energy contingency that the country is experiencing, and will be full of numerous activities inside and outside of institutions, and in communities in transformation, which

Until next October 20, art exhibitions are expected to be inaugurated, cultural groups will be held, shows will be presented in rural demarcations and educational institutions will also be venues for celebration through the artistic units created by instructors with children and adolescents, in the framework of the 18th Anniversary of the José Martí Brigade.

This edition of the Cuban Culture Day is dedicated to the 50th anniversary of the founding of the Nueva Trova Movement, the 55th anniversary of the Protest Song and the 60th anniversary of the artistic education system; Among the personalities, the 120th birthday of the writer Nicolás Guillén and the painter Marcelo Pogolotti will stand out; the centenary of the poets Jesús Orta Ruiz, El Indio Naborí, and Carilda Oliver, the politician Haydée Santamaría and the musician César Portillo.