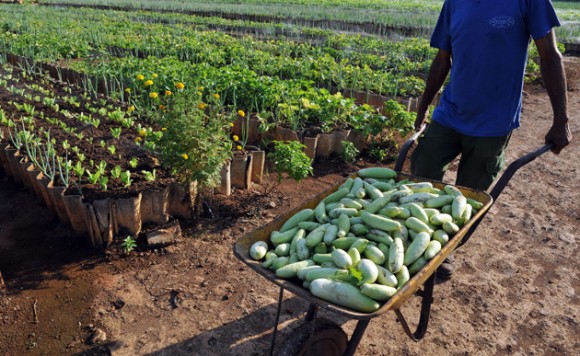 Florida, Sep 26.- It is no secret to anyone: the Cuba we live in today lacks a considerable group of material resources, essential for the full well-being of the majority of those who decided to burn the ships and remain in this port, despite the storms and threats imposed on the country’s path to the desired prosperity.

And it is, above all, at the table where we suffer the greatest daily impact, facing the horse of an inflation that rides out of control, and raises the price of agricultural products: food, meat and vegetables, to a height almost unattainable for the pocket of the honest worker.

But this same blockaded nation, squeezed to the marrow by the hand of the empire and also, why not say it: due to the lack of push of many of our hands, has an enviable resource available to everyone everywhere: the most fertile that has ever been seen.

How many homes and neighborhoods in this municipality have patios or vacant lots, where sweet potatoes and papayas can be grown, or that chicken or rabbit raised that in the black market is worth more than the crown jewels of England?

How many hectares are lost here under the weeds when they could be providing food for that family with the possibility of exploiting it with a minimum collective effort?

We are not dreaming, nor have we lost our minds: we are living in difficult times, but the intelligence, the will and the conviction to get up have to move forward together with us.

We know of the experiences of breeders who, in small spaces, obtain part of the proteins for their daily diet and even profit from marketing to their neighbors; We have similarly seen hundreds of Floridians prepare bits of idle land with a lot of sweat and get abundant fruits and money from them.

I reiterate: we lack things, but we have plenty of fertile, spacious, accessible and idle land here; the same that in almost all the rest of the planet many men and women claim, even at the cost of their own existence.

Let’s not forget what José Martí, the apostle of Cuban independence, said: «the land is the only pure, true and honest source of wealth, and to open oneself to it is to go straight to prosperity.»