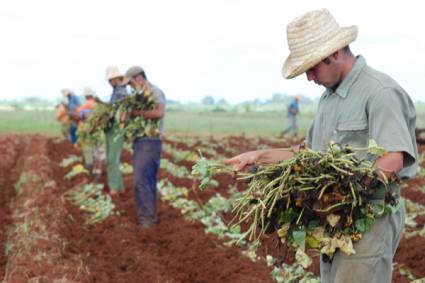 Florida, Aug 26.- Almost 30 young people from the municipality of Florida demobilized from Active Military Service (SMA) decided to request idle land in free usufruct for food production as an employment option, after fulfilling their duty to prepare for the defense of the homeland.

More than half of them demanded and received vacant land for the promotion of livestock, while the rest of the former recruits benefited by Decree Law 358 in the territory chose to dedicate themselves to other agricultural missions such as rice planting, planting various crops and raising small livestock.

It should be noted that, of the total number of demobilized young people from the Revolutionary Armed Forces (FAR) who decide to enter food production through the rehabilitation of idle land as an employment option, four are still waiting for authorization to exploit their plots.

The guidelines of the Economic and Social Policy of the Party and the Revolution charge promoting the interest, inclusion and permanence of the new generations in the tasks of the agricultural field, a determining sector for the achievement of food security and made it of independence in the Cuban nation.